Paris climate change pact ‘not enough to save us’, warns Fiji PM

By Nasik Swami in Suva 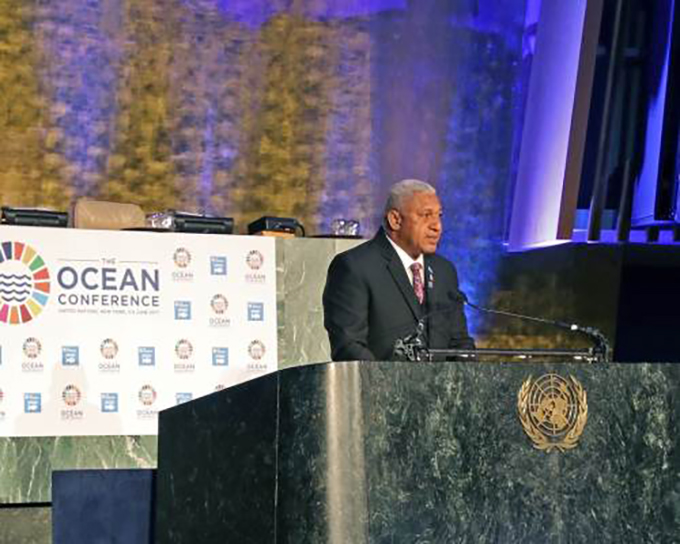 Current national contributions by countries to the Paris Agreement on climate change are not enough to save the Pacific, says Fiji’s Prime Minister Voreqe Bainimarama.

“We have to try to persuade the rest of the world to embrace even more ambitious action in the years to come, because we all know that even the current national contributions to the Paris Agreement are not enough to save us,”

he said, addressing Pacific leaders as the UN Oceans Conference came to a close in New York last week.

As the incoming president of COP23, Bainimarama called on the Pacific and its leaders to stand by him and demand decisive action, as climate change was an issue of critical importance to the region’s collective future.

“I want your input. I need your input. And I want every Pacific leader beside me as we demand decisive action to protect the security of our people and those in other vulnerable parts of the world.”

Bainimarama also outlined his worry that America’s decision to abandon the Paris Agreement may also encourage other nations to either back away from the commitments they have made or not implement them with the same resolve.

“We are all, quite naturally, bitterly disappointed by the decision of the Trump Administration to abandon the Paris Agreement,” he said.

“Not only because of the loss of American leadership on this issue of critical importance to the whole world, but because it may also encourage other nations to either back away from the commitments they have made or not implement them with the same resolve.

“But something wonderful is also happening. The American decision is galvanising opinion around the world in support of decisive climate action.

‘Widespread rebellion’
“Other nations and blocs like China, the European Union and India are stepping forward to assume the leadership that Donald Trump has abandoned. And within America itself, there is a widespread rebellion against the decision the President has taken.”

Bainimarama said dozens of American state governors and city mayors were banding together with leaders of the private sector, civil society and ordinary citizens to redouble their efforts to meet this challenge.

“So while the Trump Administration may have abandoned its leadership on climate change, the American people haven’t.

“Next week, I will go to California to meet the Democrat Governor Jerry Brown and sign up to the climate action initiative that he is spearheading. I am also in contact with his Republican predecessor, Arnold Schwarzenegger, who shares Governor Brown’s commitment.

“The point is that on both sides of American politics, we have friends who are standing with us in this struggle. And I am inviting both Governor Brown and the famous ‘Terminator’ to come to our pre-COP gathering in Fiji in October, where we hope they will join us in a gesture of solidarity with the vulnerable just before COP23 itself in Bonn the following month.”

The Paris Agreement, which Fiji has ratified, sets out a global action plan to put the world on track to avoid dangerous climate change by limiting global warming to well below 2 degrees Celsius.

Nasik Swami is a reporter with The Fiji Times

Paris climate change pact ‘not enough to save us’, warns Fiji PM was originally published on PAPUAPost.com

Amunggut Tabi: West Papua Independence is NOT Limited to Peace, Stability and Security in the South Pacific

In response to Indonesia’s strategy approaching the governments in Melanesian countries by providing what it calls “security assistance to poor Melanesian nation-states”, Amunggut Tabi from the West Papua Revolutionary Army says

West Papua independence is not limited to peace, stability and security in the South Pacific region.

Please tell the world, this independence has more to do with wider issues, more lasting aspect, and it has universal benefits to the world. It has to do with the life on this planet Earth and to the life after life, rather than just limited modern nation-state anthropocentric sentiment of peace, security, and economic development in the South Pacific.

When Papua Merdeka News (PMNews) asked to clarify what Gen. Tabi means by his statement above, he says

Of course, all these have nothing to do with economic growth and gross domestic products and mass production of the modern nation-states in this planet Earth. But one should note, that these facts have things to do with “life” and “death”.

New Guinea is not just full of natural resources to be exploited, as modern people know, but New Guinea has things to offer beyond economy, beyond money, beyond security beyond wealth, beyond prosperity.

Those who ignore or undermine the cause of West Papua independence are the ones who do not understand the real meaning this struggle. Those who support this struggle right now, we believe, receive blessings in their hearts and minds, in their life, because this life and this planet Earth knows that New Guinea is important for our survival.

Gen. Tabi also mentions that New Guinea is the home of all Melanesians.

All Melanesians come from New Guinea, we spread across the island countries from West Papua to Fiji, and all Melanesians have full right to come back to this Island when anything at all happens to the small islands across the South Pacific. We should not put hope on Australia, but New Guinea is our original home and out future home. Imagine when all small islands are threatened to be under water, and New Guinea is fully occupied by Malay-Indos, when will Australia host Melanesians? No, impossible because Australia today is occupied by Europeans, not our brother-Aborigines.

We all Melanesians are fighting in defending our race, and in protecting our home-land from being occupied by foreigners. We are protecting our future, the future of a grandchildren to come.

Amunggut Tabi: West Papua Independence is NOT Limited to Peace, Stability and Security in the South Pacific was originally published on PAPUAPost.com